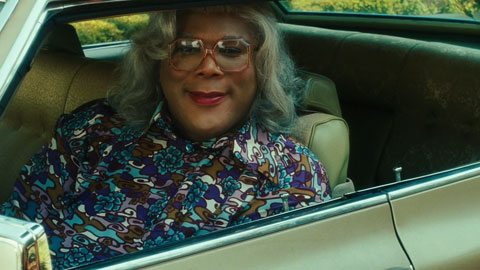 Listen up for “Explosion” by Eli “Paperboy” Reed in the film, co-wrote by Defend songwriter Ryan Spraker.

Synposis from amazon.com:
“Tyler Perry’s entertainment empire continues its long march toward ubiquity with another installment chronicling the slapstick soap opera lives of the squabbling Simmons/Brown family. For Perry fans, who are legion, the fact that his output of movie and TV projects keeps growing larger than the bust lines of his matriarchal characters is nothing but good news. And Madea’s Big Happy Family will certainly be the crowd-pleasingly funny, moralistic piece of uplifting fluff that they have every right to expect from the multi-hyphenated man on the throne. Based on one of his popular road show plays (as were many of his other movies), this one features as big and juicy a role for his in-drag alter ego as any. The pistol-packing, vitriol-spewing Madea steals the show all over the place, whether she’s raging with one-liner insults, babbling down-home homilies, sweet-talking, or slapping someone silly. Perry also gives himself even more in-character fun playing crotchety old Uncle Joe, who has some choice observations about the obesity that’s on display among more than half the cast. The story centers on Madea’s niece Shirley (Loretta Devine, giving the only performance that’s anywhere near understated), who is quickly succumbing to cancer, but resigned that it’s God’s will, and is OK with it because she’ll soon be going home to Jesus. Her dying wish is to gather her loved ones to break the news, a task that proves nearly impossible given how fractious every single relationship is involving the lives of her children and extended family. Yes, the family is certainly big–but happy?–not so much. Swooping down on them in her bouncing boat of a broken-down Cadillac, Madea orders them together and orchestrates the many revelatory or shocking crises and catharses that finally bring some closure to the bickering. It’s done in typical Tyler Perry fashion with bursts of pop-Christian and pop-psychological moralizing filtered straight outta Madea’s motor-mouth and standup comic delivery. The men fare better than the women in Perry’s philosophical, literary, and directorial intention. Without exception, the young female characters are portrayed as horrible shrews, and their men burdened providers who require the backhanded wisdom of Madea to set everyone straight. In his own performance and in the funny, sad, or inspirational messages laced throughout, Perry is playing to his core demographic to great effect. Though unremarkable in its stylistic and technical specifications, Madea’s Big Happy Family has all the right stuff to fill the hearts and souls of all those who appreciate his very specific brand of ethnic family values. And that seems to be a group that grows with every project bearing his imprimatur. –Ted Fry”