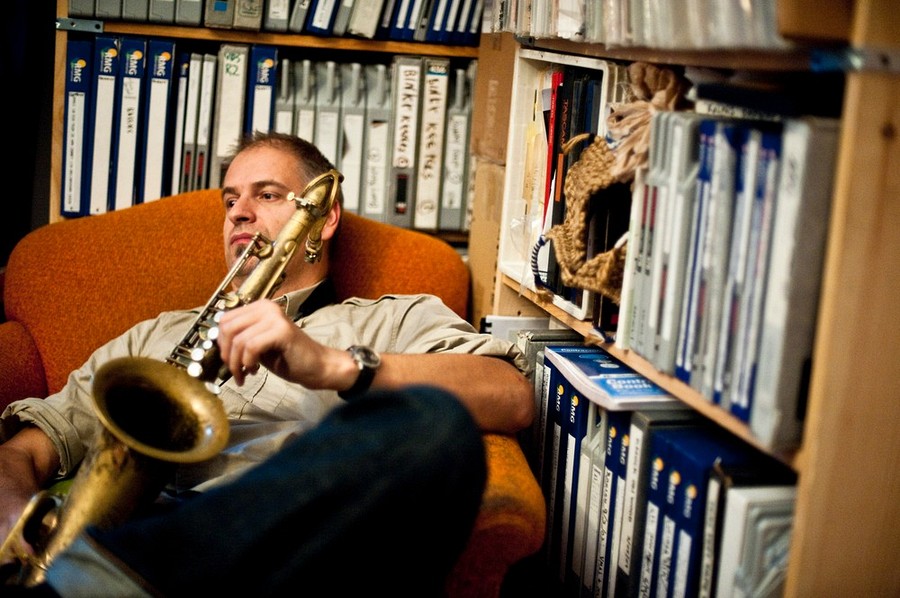 The Sugarman Three is an organ driven soul machine who have been at the forefront of the fast-growing funk scene for the past five years. Originally formed by tenor saxophonist Neal Sugarman as a Boogaloo combo, this band quickly defined it’s sound as a break from the academics of typical soul-jazz by focusing on the soulful funk element of organ music and avoiding the affectations and clichés which too often alienate jazz musicians from the dancefloor crowd.

The heartbeat of the Sugarman Three’s raw funk sound lies in the low-down, locked up groove created when Rudy Albin (long time Jack McDuff drummer) sits his spine-cracking funk beats atop the pounding syncopated organ basslines of screaming young Hammond genius Adam Scone. When you add the sweet country soul of Al Street’s rhythm guitar, you get the hard funk sound that can only grow harder with the tough-edged soul sax of Sugarman’s tenor out front.

Their first full length LP, Sugar’s Boogaloo, was released by legendary Desco Records in 1998, taking the funk clubs of the world by storm with dancefloor pounding breaks and screaming organ solos. Deep raw covers of songs like “Papa’s Got a Brand New Bag” and “Susie Q” tucked alongside soulfully arranged originals made this album an instant classic among funk and soul connoisseurs and, with some touring, helped to establish the band’s reputation for their hard-hitting instrumental soul sound early on.

In 1999, Desco Records released the Sugarman Three’s second album, Soul Donkey, which illustrated the beginning of their move towards more traditional funk, stripping down arrangements and relying less on solos and more on the strength of Scone’s percolating basslines. Sugarman’s version of the Lou Donaldson classic “Turtle Walk” from this LP was one of the last and best received 45’s out of Desco Records before the company shut it’s doors in 2000.

The next year found Sugarman and the boys on the road, touring extensively in the States and Europe. On a stop over in Düsseldorf, Germany, they laid down a few new tracks which were combined with songs from their first two albums on the Unique Records full length release Sweet Spot.

In October of 2001, Sugarman reunited with friend and former Desco Records owner Gabriel Roth and producer Bosco Mann to form Daptone Records. It was with Daptone Records that Sugarman bid his final adieu to the old boogaloo sound and, with the addition of conga, trumpet, and vocals, the Sugarman Three & Co. returned to the studio to record what would be their roughest and funkiest album yet, Pure Cane Sugar. On this record, featured vocals by funk scene favorites Lee Fields, Naomi Davis, and Charles Bradley augment perfectly the funk-fueled rhythm arrangements that sit comfortably in the driver’s seat from the first track to the last.

With the recent success of a number of their latest 45’s, and the upcoming release of their most exciting album scheduled for this fall, Sugarman Three & Co. are poised to light up the soul parties of the world with their Dynamite New Heavy Funk Sound